Home CELEBRITY Hushpuppi “God, If this life is fake, I don’t want a real life” — Hushpuppi says as Tonto Dikeh follows him back on Instagram

“God, If this life is fake, I don’t want a real life” — Hushpuppi says as Tonto Dikeh follows him back on Instagram

CELEBRITYHushpuppi
Earlier today, Hushpuppi dropped a shade to his former best friend, Mompha, after the latter claimed he is broke, and living a fake life.
His beef with Mompha has been one of the trending topics on social media lately… 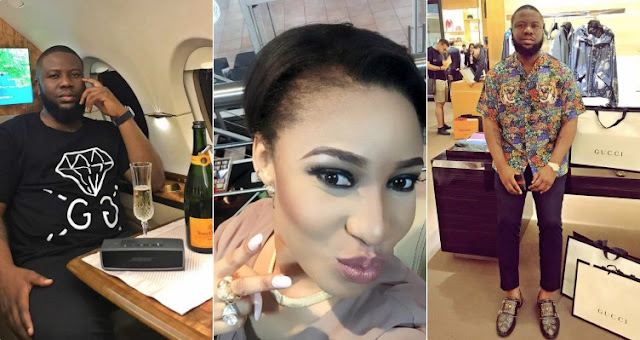 Recall in series of posts, Mompha claims Hushpuppi, real name Ramoni Abass, was a guy he housed when he was dead broke. He even shared pictures of the taxi he claims his father drives while he is always on Instagram showing off a fake life.
Since the revelations from Mompha, social media has been washed with a lot of shades and clap backs from both men.
The latest coming from Hush who begged God to continue giving him a fake life if that’s all it will take to make him continue enjoying the way he is. His quote below;


“For somebody who is broke, I spend quite a lot of money. For someone who’s living a fake life, I think I have an amazing life. God if this life is fake, please continue to grant it for me, I don’t want real life.”

He accompanied the above quote with a picture showing him about to board a jet while dressed in his beloved Gucci.

It is also worthy to note, that his recent post was liked by Nollywood actress, Tonto Dikeh, and a quick check on her Instagram shows Tonto has followed Hush back, few days after they both unfollowed themselves on Instagram, but Hushpuppi hasn’t followed her back.