NEWS
A resident of Isheri-Olofin, Ogun State, has been arrested by the police after he was caught with five children he allegedly abducted from the community. 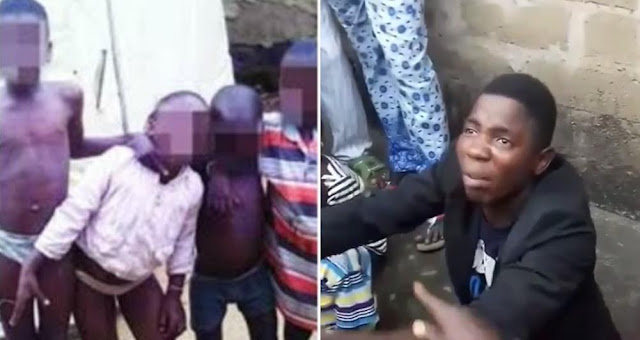 Punch Metro learnt that the suspect, whose name was given simply as Adebayo, had lured the children out of the neighbourhood.

The victims were identified simply as Tunde, 6; Kehinde, 6; Ayo, 7; Ayomide, 8; and Basirat, 8.
It was gathered that some parents of the victims and a large number of residents had attended a church crusade on Sunday, while the children played around.
Adebayo, who had moved into the community four days earlier, reportedly lured the children under false pretences of taking them somewhere for a treat.
He was about to board a bus at Kara bus stop when a resident, who was returning from Mowe, Ogun State, met him at the bus stop with the children.
When the resident, a woman, asked where the children were being taken to, the suspect reportedly rambled, making her to raise the alarm.
A resident, Taiwo Adetunji, said policemen from the Ojodu Abiodun division were alerted to the incident and the suspect was arrested.
He said,
“A church crusade was held in the community on Sunday, October 8, at about 6pm, which many people attended. The man moved into the community on October 4 and he was unknown to many people. He cashed in on the programme to abduct the kids.
“If the woman did not see him at the bus stop, he would have taken the five children away. We are still wondering how he managed to pick the children without being challenged by anybody. He probably used charms because our children don’t normally follow strangers. We have never witnessed such an incident in the community before.”
A community leader, who spoke on condition of anonymity said he collected Adebayo’s mobile phone and discovered that he had been conversing with somebody, who was expected to bring a vehicle that would take the children away.
“I collected his phone and spoke with his accomplice who was talking to him. When the caller noticed that my voice was different from Adebayo’s, he terminated the call. Since then, the person’s line has not been going through.
“A mob wanted to beat him up at the bus stop, but we cautioned them and handed him over to policemen from the Ojodu Abiodun division,” he added.
One Fatimo Femi, whose son and grandson were among the victims, said she was a neighbour to the suspect. She added that she was sleeping when the news of the abduction filtered into the community.
She said,
“The suspect was living with his friend in our compound, but my children don’t relate with him. I was surprised how he was able to lure them out of the house.”
The spokesperson for Oba of Isheri-Olofin, Alhaji Saudi Adeshina, said the incident had made them to beef up security in the community to prevent a recurrence.